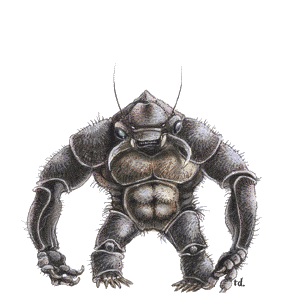 Umber hulks are powerful subterranean predators whose ironlike claws allow them to burrow through solid stone in search of prey. Umber hulks are tremendously strong, standing nearly 8 feet tall and over 5 feet wide. Muscles bulge beneath their thick, scaly hides and their powerful arms and legs all carry great claws. They have no necks to speak of, but the head features a powerful maw with rows of triangular teeth and 8-inch mandibles capable of biting through any hide or bone. Most peculiar of all are the four round eyes, spaced evenly across each umber hulk’s forehead. Umber hulks are black, shading to a lighter shade of yellowish gray on the front. Their eyes are mere blackened dots each the size of a small coin. Umber hulks have their own language.

Umber hulks dwell in the depths of the earth. They raid dungeons for food, much the way anteaters raid ant colonies, eating their fill and then moving on to let the “colony” recover. Umber hulks are usually solitary hunters. Males and females mate, then go their separate ways. One to three young are born about a year later in a special nursery which has been hollowed out by the female. Two years later, once the hulklings are big enough, the female begins taking them with her when hunting. It is during this period that unfortunate victims may stumble across more than one umber hulk at a time. No umber hulk culture is known, but it is rumored that there may be entire cities of these beings underground with tunnels that radiate out, like threads in a spider’s web, toward the nearer dungeons and mountain ranges. If true, this would explain much, for umber hulks seem to disappear or spring up in a region at will and always take great care in hiding their tunnels behind them. Ecology: Umber hulks eat young purple worms, ankhegs, and similar creatures. Their favorite prey, however, is humankind.