A halfling from Hardby with a major drinking problem

Standing at just 3’-2" and 55 lbs, Jang Milos is one of the best at what he does.
He is no mere thief but rather an expert at stealth and surprise. Those that dare challenge him best have their backs to the wall. “Silence and then their screams means a job well done” he boasts while barely being able to reach over the bar.

When Fallas (“Stinger” From Principality of Ulek) was rumored to have fallen at the hands of Davis the Reaver, he quickly paid a barge to take him to Elredd to find out more. He soon found Fina Fen Kela and her allies in Fallowfield.

Dead: 26th of Planting, 586 CY.
After seeing his comrade, Hafenree, killed during the assault on Davis’s Compound in Elredd, he found himself allied with Jack Cronus and Boethian Volonwood.

Eventually reunited with Shavinski The Orc Slayer, the adventurers found themselves in the Ravenloft mists. The castle of Strahd proved too much for him. He was soon burned alive by a fireball. .

Just hours later the party finds a clerical spell with raise dead. Jang is returned from the dead.. 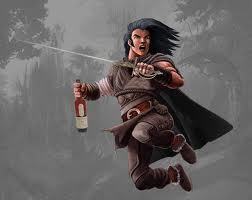